Kevin Hart’s Help From The Hart Charity Launches a New $600,000 Scholarship Program with UNCF and KIPP 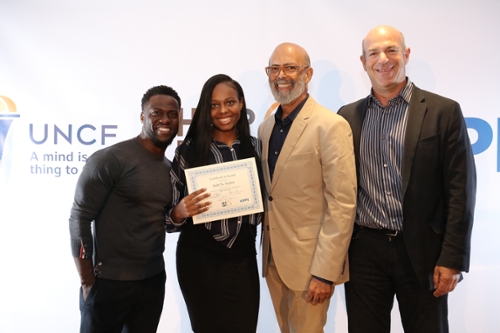 WASHINGTON, DC—Following on his generous $100,000 scholarship gift made in 2015 through UNCF (the United Negro College Fund) to four deserving college students, actor and comedian Kevin Hart has joined forces with UNCF and KIPP (Knowledge Is Power Program) to help 18 more KIPP students earn a college degree. Through a new UNCF scholarship program launched in partnership with Kevin Hart’s Help From The Hart Charity and KIPP Public Schools, the $600,000 scholarship will provide funding to support KIPP students from eight different cities who are attending 11 historically black colleges and universities (HBCUs).

UNCF is the largest provider of college scholarships for students of color in the U.S., awarding more than $100 million in college scholarships annually to deserving students. The 18 Help From The Hart Charity Scholarship recipients have been selected based on their academic and personal accomplishments and may receive substantive renewable awards based on need.

“The Help From The Hart Charity Scholarship will not only support students, but will also demonstrate support for HBCUs,” said UNCF CEO and President Michael L. Lomax. “Research shows that  HBCUs matter, and that HBCU students are having a positive college experience, but they also have an unmet financial need. Together, Kevin and KIPP have made an investment that will have a significant impact. We can’t thank them enough for their support.”

"Education and knowledge are powerful,” said Hart. “I just wanted to do my part in providing opportunities for our future leaders, especially from my Philly hometown, and show support for HBCUs. This is just the beginning; trust me when I tell you there are a lot more kids who want to go to college who don’t have the money to make it happen.”

The 18 students receiving college scholarships are high school graduates who attended KIPP public charter schools in eight different communities: the Arkansas Delta, Atlanta, Baltimore, Chicago, Houston, New Orleans, Philadelphia, and Washington, DC. A recent  survey of KIPP alumni across the country showed that the KIPP graduates who attend HBCUs reported a stronger sense of belonging, better mental health, and were more likely to have a mentor than those attending non-HBCUs.

“Nothing brings me greater joy than to see the hard work of these 18 KIPP students recognized by Kevin Hart and UNCF through this generous scholarship program,” said John Fisher, chair of the KIPP Foundation Board of Directors.

“Michael Lomax has been a longtime KIPP supporter and friend and a tireless champion for young people. We are incredibly grateful to both UNCF and Kevin Hart for their partnership and support to help our students thrive in college and achieve their dreams.”

“Giving back to build better futures is the name of the game, and we hope that others like Kevin will understand why educational investments are so important, especially now, and step up to help more deserving students,” said Lomax.

Lomax also added, “Over the last decade, UNCF has been building a relationship with the KIPP public school network, and we are so excited that KIPP’s board of directors and Chairman John Fisher are behind this outstanding new venture. There are nearly 1,300 KIPPsters currently enrolled at HBCUs, and together, we are bringing resources and shining a spotlight on these students who are doing all they can to get a college education. This unique partnership will help UNCF continue to bridge the gap from high school success to college achievement and enables UNCF to help more students get to and through college.”

About UNCF
UNCF (United Negro College Fund) is the nation’s largest and most effective minority education organization. To serve youth, the community and the nation, UNCF supports students’ education and development through scholarships and other programs, strengthens its 37 member colleges anduniversities, and advocates for the importance of minority education and college readiness. UNCF institutions and other historically black colleges and universities are highly effective, awarding nearly 20 percent of African American baccalaureate degrees. UNCF awards more than $100 million in scholarships annually and administers more than 400 programs, including scholarship, internship and fellowship, mentoring, summer enrichment, and curriculum and faculty development programs. Today, UNCF supports more than 60,000 students at more than 1,100 colleges and universities across the country. Its logo features the UNCF torch of leadership in education and its widely recognized motto, “A mind is a terrible thing to waste.”® Learn more at UNCF.org, or for continuous updates and news, follow UNCF on Twitter at @UNCF.

About KIPP Public Schools
KIPP, the Knowledge Is Power Program, is a national network of 224 public charter schools dedicated to preparing students in educationally underserved communities for success in college and life. KIPP schools are part of the free public school system and enrollment is open to all students. Started in 1994 as a middle school program, KIPP has since expanded to enroll 96,000 students in all grades from pre-K