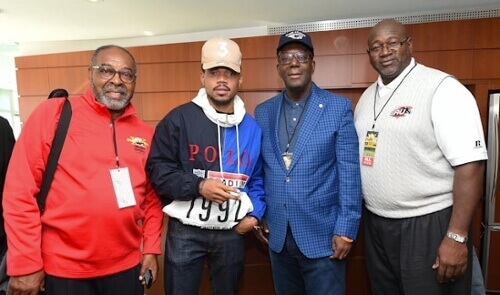 Chance wanted to experience the ‘CAU culture’, this, after he sent a tweet that went viral on August 27, 2017. "I was tryna go to Clark ATL. I’m still tryna go. Like not honorary, the full blown ya dig. Can someone help me sign up," tweeted the 24-year-old rapper.

Chance watched the game with CAU President Dr. Ronald A. Johnson, and several school executives in the presidential suite at Soldier Field. "I enjoyed spending quality time with Chance," says Dr. Johnson. "He was extremely welcoming to his city as he shared his intentions to learn more about CAU and the programs we offer," added Johnson.

CAU has been cultivating Chance to pursue his dreams at CAU since his August tweet. "Chance asked intellectually curious questions about the Mass Media Arts Department," says Dr. Nsenga Burton, Chair and Professor of New Media Production at CAU. "We discussed what we have to offer him in our production and new media courses and how he could merge that with other disciplines like Africana Studies and Political Science."

Chance, whose real name is Chancellor Bennett, grew up on Chicago’s South Side. He recently made headlines for donating one million dollars to the Chicago Public School system. During the game he told CAU officials he is interested in expanding his knowledge and applying his ‘creativity in a stimulating environment.'

Second to Atlanta, Chicago sends the largest pool of applicants to CAU of other U.S. cities. "Amazing talent comes from the Windy City," says Getchel L. Caldwell, II, Senior Vice President for Institutional Advancement and University Relations. "Chicago students travel to Atlanta for the very education and cultural experience that our city has to offer and we welcome Chance with open arms."